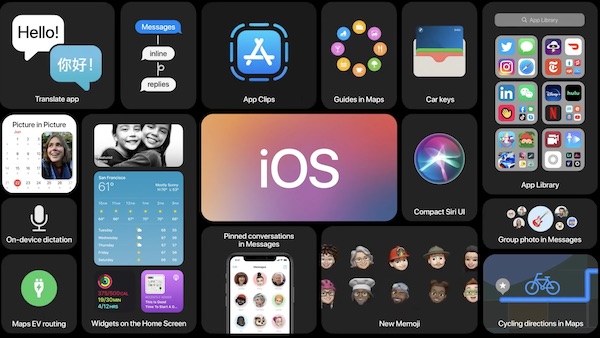 Today, June 22, Apple officially presented the future update of the operating system for smartphones – iOS 14.
The demonstrated iOS 14 received updated widgets that can now be placed directly on one of the iPhone’s desktops. You can configure widgets and select a specific location for them. In addition, the company announced the App Library feature, in which applications are automatically organized acording to sections.

iOS 14 Home Screen
Finally, Apple in new iPhone iOS 14 has changed the home screen for smartphones by adding app widgets that can be placed in any order on the desktop. Widgets are currently available for a small number of applications, but developers will add support for other programs in the future. This is the customization that iPhone users have been waiting for from iOS since the release of the first Apple smartphone. You don’t need to iOS 14 jailbreak anymore.

iOS 14 Picture to Picture Mode
iOS 14 has a picture-in-picture mode for viewing videos from Apple TV and other apps.

Siri on iOS 14
Apple has redesigned Siri — now it doesn’t open to the full screen, but appears as an icon at the bottom of the screen. Siri also received a simultaneous translation function.

iOS 14 Messages
Messages in iOS 14 have received several improvements at once — the ability to pin conversations, more Memoji options, and group chats where you can tag users and view a chain of messages addressed to certain users.

iOS 14 CarPlay
The prevalence of CarPlay in the world has reached 80% of the total number of new cars. Now CarPlay in iOS 14 has new Wallpapers and a Car Key feature that has been rumored since the beginning of 2020. The first car with CarKey support will be a BMW 5-series in 2021. Apple is working with a consortium of automakers to implement the Car Key in iOS 14 feature in other vehicles.

App Clip
With iOS 14, users will be able to use apps without installing them on smartphones. App Clip is a light version of the app (less than 10 MB) for quick access to a limited number of functions (for example, payment). You can launch apps with App Clip support by scanning a special QR code.

Call animation has also been redesigned — incoming calls are displayed in a pop-up window, rather than unfolding to the full screen, as in iOS 13 and earlier systems. Apple clarified that this applies to phone calls, as well as calls from FaceTime, Skype, and other services.

At last year’s WWDC, Apple introduced iOS 13 with a dark theme, and also highlighted a separate OS for tablets in iPadOS. In addition, the company showed an updated Mac Pro, several new features for the Apple Watch, and” buried ” iTunes for Mac computers.
Share this
Older Post Home